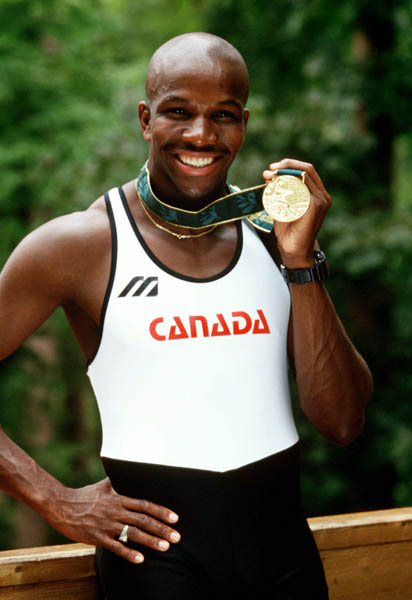 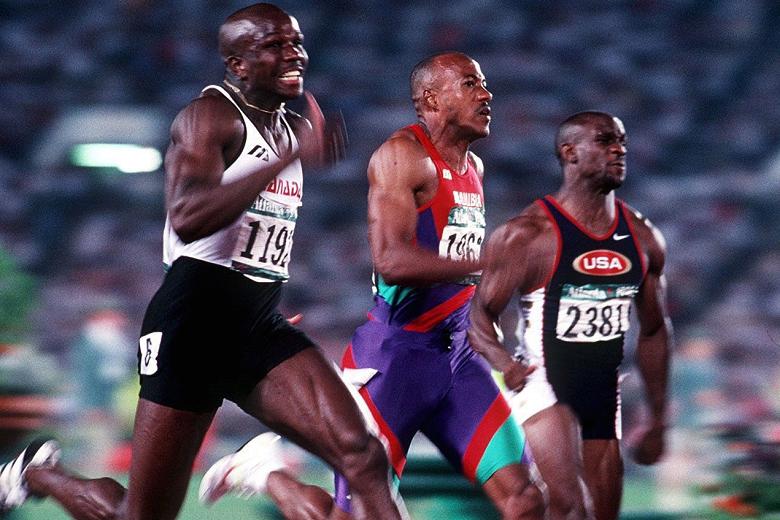 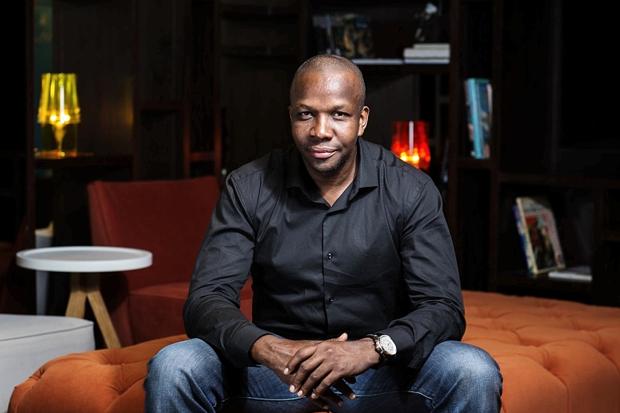 Donovan Bailey, born December 16, 1967, is the Jamaican-born African Canadian sprinter who specialized in the 100-metre dash, winning a gold medal in the event at the 1996 Olympics in Atlanta. He is considered one of the world’s all-time greatest and most dominant sprinting legends. Track and Field News named Bailey Sprinter of the Decade (90’s).

Born in Manchester, Jamaica, Bailey moved to Oakville, Ontario in Canada in 1981 to live with his father. He was on the track team in high school, and at age 16 he ran the 100-metre dash in 10.65 sec. He did not pursue running seriously, however, and instead focused on basketball. He played forward on the basketball team at Sheridan College, Oakville, where he studied economics. After receiving a diploma in business administration, Bailey started his own marketing and investment-consulting business. Sports became his hobby, and he occasionally entered sprint races. In 1991 he won the 60-metre dash at the Ontario indoor championships. Training only sporadically, Bailey did not make the Canadian track team for the 1991 world championships or the 1992 Olympics.

His first major international competition came at the 1995 World Championships, where he won gold medals in the 100m event and the 4×100 relay. A shoo-in for the 1996 Summer Olympics, he continued to impress during the lead-up by setting a world record time of 5.56 in the 50 m, one that still stands as of 2012 and has only been tied once, by Maurice Greene in 1999. At the Games he immediately became a household name after winning the 100m competition in a record-breaking time of 9.84 seconds and taking home gold in the 4×100 relay as well. His world record would stand for three years (broken by Greene in 1999), his Commonwealth record lasted until 2005 (broken by Asafa Powell), and his Olympic record stood until 2008 (broken by Usain Bolt). He remains the Canadian record holder in the event, tied with Bruny Surin. On the national scene he further cemented his fame by defeating American Michael Johnson in an unofficial 150m World’s Fastest Man competition in 1997.

At the height of his career following the 1997 season, Bailey rupturing his Achilles tendon, which effectively ended his career. He tried to make a second attempt to return in the 2000 Summer Olympics for a shot at Olympic glory, but ended up suffering from pneumonia and had to drop out during the initial rounds. As a result, in 2001 Bailey officially retired from the sport, spanning a career that saw him become a three-time World and the 2 time Olympic champion.

Following his retirement, Bailey started his own company called DBX Sport Management, which aims at helping amateur athletes find a way to promote themselves. He has also started a sport injury clinic in Oakville, Ontario.

He subsequently worked as a television commentator, and in 2002 he founded the Donovan Bailey Foundation, which assists amateur athletes.

Baily was officially inducted into Canada’s Sports Hall of Fame on two occasions: as an individual in 2004, and as part of the 1996 Summer Olympics 4×100 relay team in 2008.

Finding one’s true self is the beginning of success.