Benjamin Rucker was an African American magician, better known by his stage name Black Herman. Rucker, who was the most prominent African-American magician of his time, combined magic with a strong separatist and militant political message. His mission was to promote his view of Black power by attracting attention and support using stage magic combined with the occult and superstition. 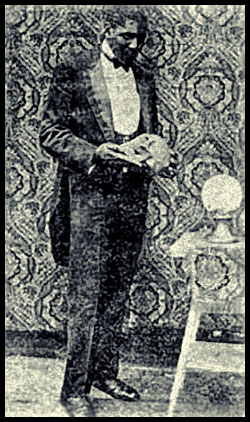 Rucker was born on June 6, 1889 in Amherst, Virginia. He started his career as an apprentice to a traveling magician and ‘miracle’ medicine salesman named Prince Herman, who eventually took him on as a partner. The two made their act a medicine show, performing magic tricks to attract customers for their “Secret African Remedy”, a tonic that was mostly alcohol with some common spices. After the death of his mentor in 1909, Rucker, then only 17 years old, continued the show, focusing on the magic and dropping the medicine show. Creating his own stage persona, Rucker took the name “Black Herman”, partially in honor of Prince Herman.

After 1910, Rucker made Harlem, New York his home base. He was exposed to, and greatly influenced by, the philosophy of Marcus Garvey and others who were fighting to improve the lives of African Americans. Rucker could be seen in Garvey’s massive Harlem parades, and it was said that he offered Garvey spiritual counsel. He began to incorporate a political message into his shows, playing to all-Black audiences in the South, but to mixed crowds in the North, a very unusual and great achievement for his time. Throughout his career, his shows promoted the message of Black pride.

In Harlem, Rucker established himself as a pillar of the community. He befriended preachers, intellectuals and politicians, many of whom met at his home for a weekly study group. He was an Elk, a Freemason, and a Knight of Pythias. According to the Chicago Defender, between 1923 and 1926, he provided full-time employment to 20 people, and part-time work for 30. He used his success to make loans to local Black businessmen and organisations, established scholarships, and performed for free to help churches pay their bills. In addition to lucrative performances in big tents throughout the country, he purchased a printing plant, established a monthly magazine, founded Black Herman’s Mail Order Course of Graduated Lessons in the Art of Magic, acquired real estate, bought shares in two cotton plantations, gave personal consultations, and started herb and root gardens in a dozen cities. Rucker became quite wealthy, and purchased a brownstone on West 119th St.

Rucker’s specialties included the “Asrah levitation.”He also produced rabbits and made the amount of cornmeal in a bowl double. Rucker claimed that his tricks were “secrets taught by Zulu witch doctors”. He did imitations of bird sounds heard in the rural South and in Africa. A number of magic tricks were compared to miracles from the Bible. He even narrated his rope escape routine by explaining that he used the methods that Africans used to escape the slave traders. Rucker would let audience members tie him up so he could demonstrate how “If the slave traders tried to take any of my people captive, we would release ourselves using our secret knowledge.”

Rucker claimed that he was immortal and that he was directly descended from Moses. He suggested that Blacks could elude Klansmen and their descendants by escaping the limitations of mortality and simply outliving them.

Rucker also capitalized on his audience’s superstitions. At times, he would use his brother, Andrew Rucker, and his assistant, Washington Reeves, as confederates in the audience. Either man would suddenly jump up, seemingly possessed by demons. Black Herman would cast out the demon (usually represented by a small snake or lizard which was released into the crowd to cause great commotion), then give the man some special tonic (which was, of course, for sale after the show), and also offer a private psychic reading to the man to further uncover the man’s “problems”. Reading were also available to any audience member who wanted to pay for one.

For a time, Rucker employed a mind reader, Madame Debora Sapphirra, as part of the act. Using the usual spirit medium tricks, Herman was able to obtain information secretly about audience members, then reveal that information during his show as proof of his “powers”. Though he was arrested several times for fortune telling, Rucker turned that to his advantage, proclaiming that the arrests were simply proof of the oppression of the African American in society, and that his power was so strong that no jail could hold him.

Charged with fortune telling and practicing medicine without a license, Herman Rucker, 39 years of age, known throughout Harlem as “Black Herman the powerful healer,” was held on $1,000 bail Sunday morning. A lengthy complaint purports to tell “Black Herman’s” method of bringing back to a lonely wife the love of an unfaithful husband…. Bottles filled with strange liquids to be sprinkled in the four corners of the wife’s bedroom and on her bed, roots to be laid against the husband’s body, printed prayers to be slept upon…. During a visit on May 15, Policewoman Sweatman reports, 15 women and one man were awaiting an opportunity to confer with “Black Herman,” who finally came out of his office immaculately dressed in [a] Prince Albert coat, striped trousers and highly-polished shoes. On the walls and ceiling of a hallway outside his office it is alleged that “Black Herman” has painted “fantastic pictures of black devils, nude women, and a life-sized photograph of himself.”–“Harlem Healer Given Setback By Woman Cop,” Chicago Defender, 1927.

Rucker’s signature trick was his “Buried Alive” act. At first, he would “hypnotize” a woman and then bury her six feet under for almost six hours as a publicity stunt or part of a carnival. Eventually, he himself was “Buried Alive.” A few days before a major performance, Rucker would sell tickets for the public to come to a plot of ground near the theater he called “Black Herman’s Private Graveyard”. They could view his lifeless body and even check for a pulse—nothing. The audience would then see Black Herman’s body placed in a coffin. As the coffin was lowered into the ground, Rucker would slip out unnoticed. For days, sometimes a week, people would pay to look at the grave, buidling the suspense over the fate of Black Herman. When the time was up, the coffin was exhumed with great drama and fanfare, and out walked Rucker to lead his audience into the nearest theater, where he performed the rest of his show. Of course, during the time of the interment, Rucker was free to travel to another town to set up the same trick, returning in time to slip back into the coffin for the amazing revival.

Rucker published a book, ghosted by a man named Young (some sources state that Rucker could not read or write), called Secrets of Magic, Mystery, and Legerdemain in 1925. The book contains his semi-fictionalized autobiography, directions for simple illusions suitable to the novice stage magician, advice on astrology and lucky numbers, a sampling of African American hoodoo folk magic customs and practices. An announcement on the book’s title page “Black Herman Comes Through Every Seven Years” referred to Rucker’s pattern of returning to venues on a regular basis. The book was sold at his performances, and was even sold for years after his death.

Rucker died in Louisville, Kentucky after collapsing on stage, the result of a heart attack. He was later declared dead of “acute indigestion.” The audience didn’t believe it. Black Herman had made a living out of faking his death, doing it so well, that when he did finally pass on, the audience just assumed it was part of the act and refused to believe that the show was over and stayed in the theater. Eventually Rucker’s body was moved to a funeral home. The audience, still assuming that it was all part of the act, followed the corpse all the way to the funeral home, anticipating his dramatic resurrection. Finally, his assistant, Washington Reeves, decided to charge a dime admission to view Black Herman’s corpse. Several thousand people took advantage of the chance to see Rucker for the last time- and even to poke him with a pin to see if he was really dead. His death made front page news in Black newspapers all over the country.” He was buried in the Woodlawn Cemetery in New York City.

A number of other African American magicians subsequently performed as “Black Herman”, including Washington Reeves, who billed himself as “The Original Black Herman”.

“You’ve got to learn to leave the table, when love’s no longer being served.”