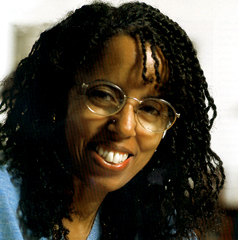 Angela Barry (née Richards) is a Bermudian writer and educator. She spent more than 20 years living abroad – in England, France, The Gambia, Senegal and the Seychelles – before returning to Bermuda, where she has primarily worked as a lecturer since the 1990s.  She was married to Senegalese Abdoulaye Barry and they have two sons, Ibou and Douds, although eventually divorcing. In 1999 she married Guyanese playwright/filmmaker Michael Gilkes and they live in Bermuda

Born in Bermuda, Barry is the youngest of the three children of Madree and Edward Richards (who was the second premier of Bermuda and the first Black Bermudian to head the country’s government). Barry’s elder sister is London-based circuit judge Patricia Dangor, and their brother is Bermuda parliamentarian, Bob Richards.

After receiving her early education in Bermuda at Central School and at the Berkeley Institute, Barry went to England in the 1960s at the age of 15 to study for her A-levels, living with her sister while attending Holland Park School in London. She went on to the University of York, obtaining a BA (Hons) degree in English & Comparative Literature,  then the Sorbonne in Paris where she studied French for two years. After earning a master’s degree in Language Arts & Education from the University of Sussex, she worked as an English teacher in the UK. After her first marriage she lived in The Gambia, Senegal and the Seychelles, before returning to Bermuda in 1989.

She published her first short story a year later in Palmetto Wine, which was produced by the Bermuda Writers Collective. In 1993, she won a James Michener Creative Writing Fellowship to attend the Caribbean Summer Writers Institute at the University of Miami. She describes that experience as “a watershed, absolutely pivotal in building confidence.” There, she met literary heavyweights who would play pivotal roles in her life: Barbadian novelist George Lamming, whom Barry considers a literary mentor, and Guyanese playwright/filmmaker Michael Gilkes, whom she married in 1999.

For many years a lecturer at Bermuda College, she introduced there a groundbreaking course in Bermudian Literature, “starting with early perceptions of the Island in the 17th century and Shakespeare’s The Tempest, to Mary Prince in the 19th century”.  She is co-chair of the Burland Collection Committee, concerned with the literary legacy of Brian Burland, described by Barry as “the greatest writer never to be known or acknowledged in the country of his birth”. Barry has also taught at Bermuda High School.

Barry’s early creative writing was in the form of short stories she produced as part of the Bermuda Writers’ Collective. Her work appeared in Palmetto Wine, published in 1990 by the collective, and in the 1993 anthology An Isle So Long Unknown: Short Stories. She finished the manuscript for her first book,  Endangered Species and Other Stories (2002), about four years after attending the Writers Institute. At the time the book was considered “undoubtedly one of the most significant works of fiction to come out of Bermuda, giving a glimpse into a society which lies culturally somewhere between the USA, the Caribbean and its British colonial past.” In 2008 the Brian Burland Prize for Fiction was jointly awarded to Barry for Endangered Species and to Rawle Frederick for A Ballad of Orange Valley.

Her first novel Gorée: Point of Departure (2010), looks at family and identity through the Atlantic holocaust. In the words of Geoffrey Philp, “Goree is more than a memorial—although that in itself would be an accomplishment. It is a story of bridging distances, both physical and psychic, between Africa and the Caribbean, London and St. Lucia, damnation and redemption in the lives families torn apart by an estranging ocean.” It was nominated for the 2012 International IMPAC Dublin Literary Award and in 2013 won the Brian Burland Prize for Fiction.

Barry’s work has also been published in various journals, including the Bermudian Magazine, Massachusetts Review, The Caribbean Writer, BIM: Arts for the 21st Century, and Anales Caribe.