“The greatest challenge I faced in becoming a neurosurgeon was believing it was possible.”

Alexa Irene Canady was born in Lansing, Michigan, on November 7, 1950, to a dentist father and a mother who worked in education. While Alexa Canady was attending the University of Michigan, a health careers summer program for minority students sparked her interest in medicine. According to Canady, “The summer after my junior year. I worked in Dr. Bloom’s lab in genetics and attended a genetic counseling clinic. I fell in love with medicine.” After graduating from college in 1971 with a major in zoology, Canady continued on to the university’s medical school.

“During my first two years of medical school, I fell in love with neurology.” 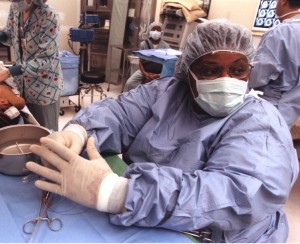 For Canady, surgeries ran the gamut from attempting to repair trauma-related injuries to confronting neurological illnesses. Though initially wary of how she would be accepted in her profession, she found that her charges and their parents appreciated her dedication to patient care. In a 1983 interview, she related that, although some people were at first surprised to see her, she suspected that they told themselves, “She’s a black woman and a neurosurgeon, so she must know what she’s doing.”

In 1984, Canady was certified by the American Board of Neurological Surgery, another first for a female African American. Three years later, she became director of neurosurgery at the Children’s Hospital. Under her guidance, the department was soon viewed as one of the best in the country.

“In order to provide good quality care, it is so important that patients are able to talk to you and not regard you as some deity above them.”

In her work as a neurosurgeon, she saw young patients facing life-threatening illnesses, gunshot wounds, head trauma, hydrocephaly, and other brain injuries or diseases. Throughout her twenty-year career in pediatric neurosurgery, Dr. Canady has helped thousands of patients, most of them age ten or younger.

In addition to her other responsibilities, Canady conducted research and taught as a professor of neurosurgery at Wayne State University. She maintained a busy schedule until her retirement from the Children’s Hospital in 2001. After retiring, Canady moved to Florida. When she learned that there were no pediatric neurosurgeons in her immediate area, she began to practice part-time at Pensacola’s Sacred Heart Hospital.

Canady holds three honorary degrees: a doctorate of humane letters from the University of Detroit-Mercy, awarded in 1997; and a doctor of science degree from the University of Southern Connecticut, awarded in 1999; and a doctor of humane letters honorary degrees from Roosevelt University in 2014. She received the Children’s Hospital of Michigan’s Teacher of the Year award in 1984, and was inducted into the Michigan Woman’s Hall of Fame in 1989. In 1993, she received the American Medical Women’s Association President’s Award and in 1994 the Distinguished Service Award from Wayne State University Medical School. In 2002, the Detroit News named Dr. Canady Michiganer of the Year.